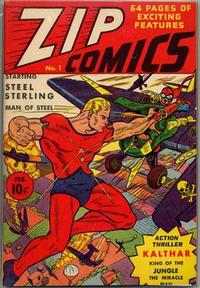 First Line of Dialogue or Text
When John Sterling's father was racketeered out of all his great wealth........
Genre
superhero
Characters
Steel Sterling [John Sterling] (introduction, origin]; policemen; The Black Knight (villain, introduction, death); The Black Knight's gang (villains, introduction for all)
Synopsis
John Sterling completes the chemical formula which will completely protect him from the underworld's bullets, unlike his murdered father who was killed by a group of ruthless gangsters. John bathes himself in the formula, which has been poured into a cauldron of molten steel, dives in the cauldron, and emerges as a man with the resistance, magnetism and strength of steel.
Reprints
Keywords
Beeville

First Line of Dialogue or Text
Say - I want a good watch-dog!
Characters
Mugsy (a dog)

First Line of Dialogue or Text
The Scarlet Avenger in real life is Jim Kendall.
Genre
superhero
Characters
The Scarlet Avenger [Jim Kendall] (introduction, origin); Operative No. 12 (introducion); Chief Mike Brady; Sledge Hammer (villain, introduction)
Synopsis
Jim Kendall has devoted himself to wiping out gangland since the death of his wife and child while flying in a hijacked plane, which crashed, and in which all were killed except Jim. In the accident, his face muscles were paralyzed and Jim became the man who never smiled. Kendall has a giant scientific brain, and uses that science to the aid of his crusade.
Reprints

Kendall fashioned for himself a scarlet robe, woven from steel into a super-fine, bullet-proof steel-mesh cloak, and the flaming arrow is the emblem of Scarlet Avenger.

[The Rustlers of South Valley] (Table of Contents: 4)

Art is identical to Volp's many signed and unsigned Loop Logan stories in Blue Ribbon Comics, from #4. He can be spotted by his very realistic horses in #13, bony faces with marked cheek lines and mouth inked in two short lines. Also the small lines on each side of nose or smiling cheeks. Compare as well his signed London stories in Daredevil Comics #9 and 10 (Lev Gleason) The faces are more easy to spot a few stories later, but the horses are the same.

This bronze jungle lord was raised by the Urganas after his father died protecting them from Arab slave traders. In addition to being able to talk to the beasts, the witch doctor Talo gave him red grains that enables him to grow to 15 feet tall and green grains to restore him to normal height which helps to make him stand out from the many other jungle lords out there. His mate is the brunette Kate Goodwill.

Genre
crime
Characters
William Edward Hickman (murderer)
Synopsis
Executions are likely to be drably gruesome affairs even to the most hardened newspapermen.

[The Pirates of Ho Tsin] (Table of Contents: 8)

[The Ritania-Hundaria War] (Table of Contents: 11)

Zambini possesses some real magic ability, and also owns a "boomerang" necklace that makes evil magics return to their source, allowing him to follow. He loses his abilities when someone makes and maintains physical contact. He speaks magic spells generally by inserting "ab" into the words.