The text piece ""The White Cat Murder" has a half-page illustration (signed "Marsh") on the first page. It was part of the contest advertised on the front cover. Entrants had to "state by whom the murders [that took place in the story] were committed and the motives" in 500 words or less. Deadline for entries was July 1, 1933.

"Wu Fang, King of the Dope Smugglers" is a full page ad for the next issue appearing on the inside back cover. It consists of one page from the aforementioned story with advertising copy superimposed over it. 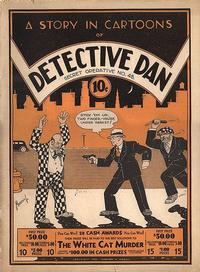 First Line of Dialogue or Text
"Detective Dan, Secret Operative 48, as this story opens, is out walking with his sweetheart, Dell."
Genre
crime; detective-mystery

First Line of Dialogue or Text
"Detective Dan was just getting settled for a comfortable night at home."
Genre
adventure; crime; detective-mystery