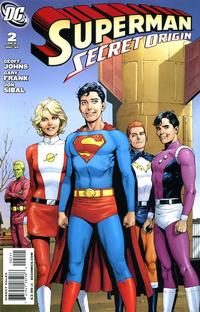 Superboy and the Legion of Super-Heroes (Table of Contents: 1)

Genre
superhero
Characters
Lionel Luthor (death); Superboy [Clark Kent]; Chief Parker; Lex Luthor; Jonathan Kent; Martha Kent; Lana Lang; Legion of Super-Heroes [Cosmic Boy; Saturn Girl; Lightning Lad; Chameleon Boy (voice); Triplicate Girl; Brainiac 5; Phantom Girl]; Krypto (voice); Science Police; Time Sphere
Synopsis
In Smallville, a drunk driving a truck comes upon a landslide in the road, but can't stop; no brakes. He's suddenly rescued by a flying boy. Later, the police don't believe his story. They call Lex Luthor, telling them that his father is OK. After hanging up, Lex is angry. Later, Clark discusses what happened with his folks, and wonders if he is alone in the universe. In the library, Clark runs across Lex, who expresses his desire to leave Smallville for Metropolis. Clark wants to be his friend, but Lex does not. After a talk with Lana, Clark walks (and feels) alone, but is confronted by a trio of teens from the future, who just wanted to meet him. He convinces them to take him on a visit to the future. They finally do so, allowing Superboy to operate in public for the first time. Soon after arrival, the teens are called on to handle a threat from human supremacists. After defeating them, it appears the Legionnaires aren't real popular with the Science Police who soon arrive. On their way back to the time sphere, they encounter more Legionnaires, including Brainiac 5, who bawls them out for bringing Superboy to the future. But Lightning Lad gets Brainy to think about how they could make Superboy part of the club without time repercussions. They take Superboy back to his time, and give him a Legion ring, saying they will see him tomorrow. At home, Clark tells what happened to his folks, just as a Kryptonian rocket arrives in Smallville. Superboy stops it, and hears barking inside. Chief Parker arrives at Lex's house to tell him that his father died in the hospital. Lex pretends to grieve, but appears to have planned this, so he could escape Smallville to go live in Metropolis.
Reprints

Story continued from the previous issue. The Interlac text on page 14 is translated as follows: "THERE HE IS" and "TURN YOUR LEGION FLIGHT RING TRANSLATORS ON", and on page 18 as "CENTER" and "SUPER MUSEU" (cut off; presumably "SUPERMAN MUSEUM"), and on page 20 as "FARM" (cut off; presumably "KENT FARM"); and the Kryptonese on page 8 as "TEST ROCKET CONNECTION ESTABLISHED REROUTING", and on page 28 as "TEST ROCKET ARRIVAL IMMINENT". The bottle at the bottom of page 1 resembles the bottle on the cover of Action Comics #869, which was originally a beer bottle but was changed to say "SODA POP" before the issue shipped (Gary Frank was the artist in both cases).