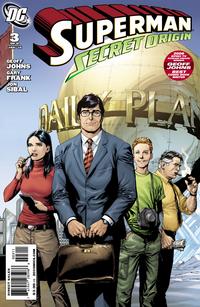 Genre
superhero
Characters
Superman [Clark Kent]; Rudy Jones; Ron Troupe; Steve Lombard; Catherine Grant; Jimmy Olsen; Perry White; Lois Lane; Lex Luthor (cameo); Professor Vale; Jonathan Kent (flashback, cameo); Martha Kent (flashback, cameo)
Synopsis
Clark Kent arrives in Metropolis for his first day as a reporter at the Daily Planet. Running late due to backups on Luthor Avenue, he rushes into the building, running into (literally) Rudy Jones in the elevator, who proceeds to bum Clark's lunch from him. After meeting some of the staff, he helps out Jimmy, currently working as an unpaid intern. He finally makes his way to Perry's office, who is arguing with Lois about her articles on Lex Luthor. After meeting Clark, Lois gets an idea on how he can help her with her latest story. The Planet has been banned from covering Luthor, but Lois uses Clark as a distraction to sneek into his latest press conference, held on the roof of his building. At the conference, Luthor announces he has developed a new metal alloy, Metallo, and has it demonstrated as a remote-controlled exoskeleton, strong enough to lift a helicopter. Lois is recognized and runs to escape, but a pursuing guard interferes with the exoskeleton, dropping the helicopter and forcing Lois off the roof, followed by the helicopter. Clark sees what is happening, rushes into an alley to change to Superman, and rescues her and the helicopter. She is amazed by him, but before they can say much, they are surrounded by a crowd, and Superman leaves. He thinks back to Smallville when his folks warned him about what would happen when he went public, and he is concerned that he made a mistake by revealing Superman's existence.
Reprints

Story continues in the next issue. There are a lot of allusions to Superman [The Movie] (1978), from the look and personality of Clark Kent to the rescue of Lois and the helicopter.

Ian shows off pencil art from Blackest Night: Wonder Woman #1. Appears on page 42 in this issue.