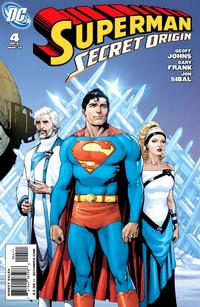 Genre
superhero
Characters
Superman [Clark Kent]; Parasite [Rudy Jones]; Lex Luthor; Lois Lane; Perry White; Jimmy Olsen; Ron Troupe (cameo); Steve Lombard (cameo); Catherine Grant (cameo); Jonathan Kent (flashback, cameo); Martha Kent (flashback, cameo)
Synopsis
Luthor has his daily pick of someone to help, and (with the aid of his staff), picks Daily Planet employee Rudy Jones. Taken inside, Rudy snacks on free donuts while Luthor says what will happen to him, before turning him over to his team for tests. Lois and Clark are "invited" to Lexcorp to talk over what happened the previous day with Superman. Jones finishes the tests, but drops one of the donuts into some hazardous chemicals that had spilled on the floor. He eats it anyway, but then starts to morph into a strange creature, attacks a bystander, and bursts into the room where Lex is meeting with Lois and Clark. Clark slips away in the confusion, and as Superman takes the creature outside to the street. But the creature attacks Superman, draining him. Superman gets away, and counter-attacks with heat vision and super-breath to defeat him. Luthor observes this, and confronts Superman, accusing him of being an invader. Superman flies off, and goes to the Daily Planet roof to think, where he finds Jimmy. They start talking, and realize that neither has any friends in Metropolis, and decide to be friends. Jimmy asks to take his picture, and Superman agrees. Luthor looks at newspapers, most playing up Luthor's angle of an invading Superman; except the Planet, in which Lois' article (with Jimmy's photo) calls Superman a savior.
Reprints