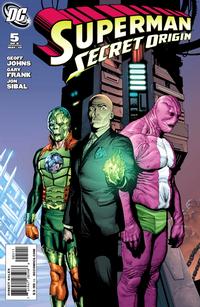 Genre
superhero
Characters
Superman [Clark Kent]; Jimmy Olsen; Lois Lane; Lex Luthor; General Sam Lane; Perry White; Metallo [John Corben]; Catherine Grant (cameo); Parasite [Rudy Jones] (cameo); Ron Troupe (cameo); Steve Lombard (cameo)
Synopsis
Superman helps firemen at a fire, which angers Luthor. He and General Lane team up to confront the perceived threat, using a metallic war suit. John Corben stops by the Planet to see Lois and discuss things. Clark intervenes, taking Lois to lunch. General Lane starts another fire to get the attention of Superman, and invites him to a meeting; but that turns into an interrogation, which Superman refuses to tolerate. As he walks out, he is attacked, first by soldiers but then by Corben in the Metallo suit, which contains Kryptonite. Superman is weakened, and hurt by bullets, but Corben is also badly injured by a ricochet. Superman manages to escape, and Corben undergoes surgery by Luthor to save his life. Meanwhile, General Lane shuts down the Daily Planet.
Reprints

The Dastardly Death of the Rogues (Table of Contents: 2)

House ad for: Brightest Day (Checklist for April-June 2010). Appears on page 17 in this issue.

Ian goes over what's coming up in Brightest Day, and includes a checklist of the first set of issues (April-June). Appears on page 42 in this issue.