This issue was originally solicited for 2010-05-26, but finally went on sale 3 months late from the solicited date. "Printed by Quad/Graphics, Montreal, QC, Canada. 8/18/10."
This issue has variants: 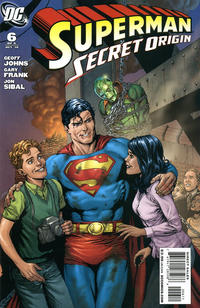 The End (Table of Contents: 1)

Genre
superhero
Characters
Superman [Clark Kent]; Lois Lane; General Sam Lane; Jimmy Olsen; Perry White; Catherine Grant (cameo); Steve Lombard (cameo); Ron Troupe (cameo); Lex Luthor; Metallo [John Corben]
Synopsis
General Lane tells his daughter that Superman is an alien. Luthor manages to save Corben by surgically changing him into Metallo. Superman continues fighting the army, but then Metallo attacks. With Jimmy's help, Lois escapes from the Planet, and finds Superman, encouraging him, and recognizing Corben as Metallo. Metallo is finally defeated; General Lane tries to have Superman arrested, but the people, whom Superman was trying to protect, defend him. Luthor is upset at all this, especially when the crowds no longer come to him; instead, they are looking up in the sky for Superman.
Reprints

Story continued from the previous issue.

Ian talks about the excitement at DC these days, and about one last chance to get together and discuss it at the Baltimore Comic-Con running August 28th and 29th in Baltimore, Maryland. Appears on page 50 in this issue.

Total of 5 one-page and 1 two-page ads for: Even Looks Good with Tights (sneakers, Journeys/Converse), React (gum, Wm. Wrigley Jr. Company), Our Cover... or Yours? - Hero Factory (sweepstakes, Lego), Metroid Other M (2 pages, video game, Nintendo Wii), Like Me or Don't (abovetheinfluence.com), and got milk? with Deron Williams (milk, America's Milk Processors). Appear in various places in this issue.