The main image is taken from the splash page of the Batman story in Batman #407. 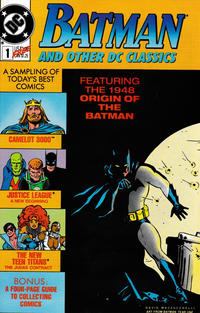 The New Age of Comics! (Table of Contents: 1)

Inside front cover. Introduction, promo for the various collected editions the stories printed in this issue are also collected in. Also includes the indicia.

The Origin of the Batman! (Table of Contents: 2)

Genre
superhero
Characters
Batman [Bruce Wayne] (origin retold in detail); Robin [Dick Grayson]; Commissioner James Gordon; Thomas Wayne (flashback, death); Martha Wayne (flashback, death); Joe Chill (villain, name revealed in this story, Thomas and Martha Wayne's murderer, death); Feets Borgam (killer, death); Monty Julep (illegal gambler, death)
Synopsis
While investigating criminal activity at a transport company, Batman recognizes the owner, Joe Chill, as the man who killed Thomas and Martha Wayne years before. Batman tries to find evidence of Chill's illegal operations, but when he fails, he decides to reveal his identity to Chill and tells him that will be watching him and will catch him eventually. In a panic, Chill flees to his gang, but when they find out Chill is responsible for Batman's existence they shoot him, and only after do they realize that they should have asked Chill for Batman's real name.
Reprints

[The Past and Future King!] (Table of Contents: 3)

A Guide to Comics Collecting (Table of Contents: 6)

Even Super-Heroes Take Time Off for Their Weekly Comics Buyer's Guide (Table of Contents: 7) (Expand) /