On sale date from the publication date and volume number found at the Catalog of Copyright Entries, Part 2, Periodicals, New Series, Volume 35, January-December 1940, Numbers 1-4. Class B periodical. Copyright number B 440423. 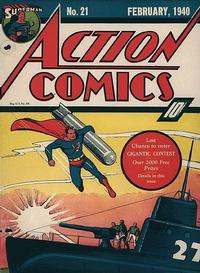 [The Atomic Disintegrator] (Table of Contents: 3)

Genre
superhero
Characters
Superman [Clark Kent]; George Taylor; Terry Curtis (inventor, introduction); Ultra-Humanite (villain, apparent death)
Synopsis
Ultra hears of the invention by Terry Curtis of an atomic disintegrator he has created and vows to get it, all in order to further advance his plan to dominate the world.
Reprints
Keywords
Daily Star; Metropolis; Torture Ray

Oddity: on page 1, Clark Kent mysteriously is shown in a suit, then undershirt, and back to suit again with no explanation.

The last panel of the story introduces by illustration and text a new feature called The Spectre.

First Line of Dialogue or Text
For many long hours, Chuck has followed the twists...
Genre
western-frontier
Characters
Chuck Dawson

[The Gun-Running Racket] (Table of Contents: 7)

[The Doll Murders] (Table of Contents: 9)

A Blaze of Glory (Table of Contents: 10)

The Deaths on the Moor (Table of Contents: 16)