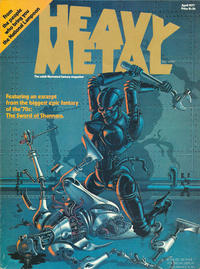 Series of self-contained stories with a Twilight Zone feel about historical-ish soldiers finding themselves in unsettling situations. Runs through the July issue, then next appears in January 1978.

The Adventures of Yrris (Table of Contents: 6)

The Sword of Shannara (Table of Contents: 9)

Preview of the novel.

First Line of Dialogue or Text
Many of these people...
Genre
science fiction
Reprints

The introduction to the May 1977 issue states Jack Adler was asked to color these pages, but Bruce Patterson writes a letter in the March 1978 issue crediting himself as colorist and explaining his choices to a disgruntled Bode fan. Part 1 of 4.

Back cover illustration is a preview of a colored, partial panel from "Agorn", which appears in the next issue.