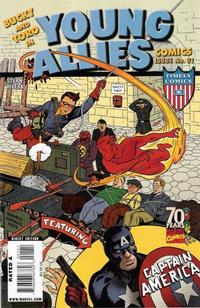 This page contains the indicia and credits for this issue with an accompanying illustration.

First Line of Dialogue or Text
Hello , pals! There's a lot to be done this month, so let's get started --
Characters
Captain America [Steve Rogers]; Bucky [James Barnes]
Synopsis
Captain America encourages his Sentinels of Liberty clubs to appoint lieutenants and send in their names and addresses in exchange for "Secret Sealed Orders".
Reprints

The Young Allies Deal a Blow for Justice (Table of Contents: 4)

[The Kidnapping of Diana Dunn] (Table of Contents: 6)

The first line of the story reads: "Terry... my boy... we've got a peach of an assignment!"

Captain America and the Bomb Sight Thieves (Table of Contents: 7)

Genre
superhero
Characters
Captain America [Steve Rogers]; Bucky [Bucky Barnes]; Sentinels of Liberty; Professor Colby; One-Eye; Monk
Synopsis
The Sentinels of Liberty hold a meeting and invite Steve Rogers to speak to them. But when a gang of toughs show up to steal a valuable invention next door from a professor's lab, it's Captain America who tells the boys to come to the aid of the professor.
Reprints

Synopsis
Games and an offer to send in 10 cents for membership in Captain America's Sentinels of Liberty.
Reprints