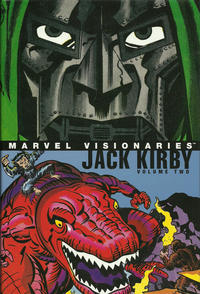 The Riddle of the Red Skull (Table of Contents: 2)

Genre
superhero
Characters
Captain America [Steve Rogers]; Bucky [Bucky Barnes]; Red Skull [George Maxon] (villain, introduction); Major Croy (dies); General Manor (dies)
Synopsis
Cap and Bucky come face to face with a villain who scares the wits out of his victims, then injects them with a poison that convinces others that he has killed them with his eyes!
Reprints

The Dream World of Doris Nelson! (Table of Contents: 4)

Job Number
V-318
Genre
fantasy-supernatural
Characters
Fin Fang Foom (introduction); Chan Liuchow; Chung Liuchow
Synopsis
A young historian from Taiwan crosses to the mainland to awake the dragon Fin Fang Foom and foil a communist invasion. He lures the dragon to the coast to wreck the invasion fleet, and then lures it back to its layer before restoring its mystical slumber.
Reprints
Keywords
monsters

Acrobat last appears in issue #106 (March 1963). This story involving a Captain America imposter was a try-out to test the idea of reviving him. The real Cap would return only 4 months later in Avengers, The (Marvel, 1963 series) #4 (March 1964).

The Beginning of the Two-Gun Kid (Table of Contents: 9)

The Living Shadows! (Table of Contents: 11)

The Summer Must End! (Table of Contents: 12)

The Dismal Dregs of Defeat! (Table of Contents: 15)

The Dismal Dregs of Defeat! (Table of Contents: 16)

The Peril and the Power! (Table of Contents: 19)

The Peril and The Power! (Table of Contents: 20)

Enter, The Avengers! (Table of Contents: 21)

Genre
superhero
Characters
The X-Men [Professor X; The Angel; The Beast; Cyclops; Marvel Girl [Jean Grey]; Iceman]; The Avengers [Giant-Man [Hank Pym]; Thor; Captain America [Steve Rogers]; Iron Man [Tony Stark]; Wasp]; Lucifer (first appearance)
Synopsis
Xavier has tracked down Lucifer, who cost him the use of his legs, but finds his foe's heartbeat is rigged to a giant thermal bomb. The X-Men arrive in Bavaria and run across the Avengers who have also just arrived. The X-Men have to stop the Avengers from defeating Lucifer since by defeating Lucifer, the world will be destroyed. After Xavier gives Lucifer a mind blast that renders him unconscious, he contacts his team for help and the Avengers agree to let the X-Men clean up the current crisis on their own. Cyclops uses his eye beams to disable Lucifer's thermal bomb.
Reprints

The Hammer and the Holocaust! (Table of Contents: 27)

The Silver Burper (Table of Contents: 31)

Fighting Side-By-Side With... Captain America and Bucky ! (Table of Contents: 34)