Each copy of the comic came with one of six free metallic badges designating a rank of Starlord Trooper. One could be a Laser Specialist, Pilot, Tank Commander or Time Warden, or assigned to the Mek War Controller Robot Regiment or Skateboard Strike Force. 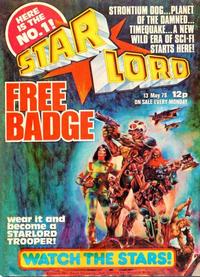 Planet of the Damned [Chapter One] (Table of Contents: 1)

First Line of Dialogue or Text
Everything's wrong!
Genre
science fiction
Characters
Lew Kerr; Stan Hackmann; Bosun Flint; Captain Roker
Synopsis
A transatlantic jet is sucked through a hole in the sky in the region of the Bermuda Triangle and crash lands on a hostile planet that isn't in Kansas. There they meet refugees from other vessels that have disappeared in the vicinity of Bermuda.
Reprints

R. E. Wright is an alias. The strip was conceived and thrashed out by Pat Mills for the launch of 2000 AD a year previously, but discarded. When IPC switched the frequency of Starlord from monthly to weekly just prior to launch new strips were needed and Planet of the Damned was pulled from the files. Editor Kelvin Gosnell re-jigged the strip, and assorted others scripted issues.

The credits in the 2016 collection "Planet of the Damned & Death Planet" confirms that Pat Mills wrote this opening segment.

Timequake [Chapter One] (Table of Contents: 2)

First Line of Dialogue or Text
London, New York and Moscow hit by nuclear strikes
Genre
science fiction
Characters
James Blocker; Marcus Geladius; Harl Vinda; Suzi Cho; Quexalcholmec
Synopsis
Jim Blocker is pulled out of time to the Cretacious era and told he is the direct cause of 20th century London being devastated by nuclear barrage.

Only the first two story pages are in colour, painted by Kennedy, who produced the remainder in a grey wash.

Hail, Star-Troopers - Welcome to Your First Starzine! (Table of Contents: 3)

Editor Kelvin Gosnell, in the guise of Starlord, introduces readers to the new comic.

First Line of Dialogue or Text
Die, dogs!
Genre
science fiction
Characters
Johnny Alpha; Wulf Sternhammer
Synopsis
In the 22nd century bounty hunting is left to universally despised cadre of mutants known as Strontium Dogs after the radiation that deformed them. Foremost among them is the team of Johnny Alpha and Wulf Sternhammer armed with an array of fantastic weapons to help them.
Reprints

Day Of The Robot (Table of Contents: 6)

Story pages 3, 4, and 11 are in colour, and Pino illustrates 5-10 in a grey wash. The Ro-Busters were actually designed by Kevin O'Neill, who never got to draw the strip in Starlord.