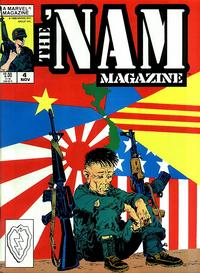 First Line of Dialogue or Text
An LZ somewhere in the Iron Triangle...
Genre
war
Characters
Duong; Phan Boi Chau [Vietnamese Nationalist]
Synopsis
Duong, a Kit-Carson scout for the U.S. Army tells the story of how he has fought for his country and eventually left the communist forces and joined the Americans.
Reprints

In the Underground (Table of Contents: 4)

First Line of Dialogue or Text
Somewhere near Chu Chi.
Genre
war
Characters
Ed Marks; Lt. Espino; Marty [Tunnel Fighter]; Mike Albergo; Verzyl
Synopsis
Ed's squad finds a tunnel in the jungle. After the tunnel specialists are brought in, one is injured and Ed Marks volunteers to go into the tunnel.
Reprints

The Tunnel Rat (Table of Contents: 5)

First Line of Dialogue or Text
You ever notice how sounds kind of stay with you?
Genre
war
Characters
'Fats' Duff; SP5 Frank Verzyl
Synopsis
Frank Verzyl loses his sanity in a VC tunnel.
Reprints

This story is prose accompanied by drawings without dialogue balloons.