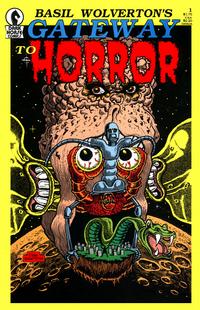 Historical article on Wolverton and the stories reprinted in this issue, illustrated by select panels and by a Wolvertonesque cover by Fox from Weird Tales magazine.

Gateway to Horror (Table of Contents: 2)

Where Monsters Dwell (Table of Contents: 3)

Wolverton's splash panel was rejected and replaced by one drawn by an unidentified artist, according to the text article in this issue. Speculation as to the artist includes Carl Hubbell, Vern Henkel and Carl Burgos.

One of Our Graveyards Is Missing! (Table of Contents: 4)

They Crawl by Night! (Table of Contents: 5)