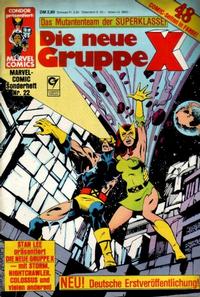 Genre
Superhelden (superhero)
Characters
FEATURE: X-Men [Professor X; Cyclops; Phoenix [Jean Grey] (Death; also as Marvel Girl and Dark Phoenix); Storm; Wolverine; Colossus; Nightcrawler]; GUESTS: Watcher; Recorder; Beast; Angel; Lilandra; Shi'ar; Kree; Skrulls; Supreme Intelligence; Gladiator; Imperial Guard [Starbolt; Oracle; Tempest; Nightside; Smasher; Warstar (1st); Earthquake (1st); Hussar (1st); Manta (1st)]
Synopsis
Lilandra transports the X-Men to her base so that Phoenix can be killed for her crime of wiping out an entire star system; Xavier explains that the Phoenix Force has been purged from Jean and demands the right to trial by combat when his captors refuse to listen; The X-Men and the Imperial Guard fight on the Blue Area of the Moon to determine Jean's fate; During the battle, Dark Phoenix manifests herself once again and Jean sacrifices herself rather than let the Phoenix loose on the universe.
Reprints

As is now known, Phoenix and Jean Grey were never one and the same as revealed in Jean's resurrection in Avengers #263 and Fantastic Four #286; In the original story, Jean Grey didn't die and the story with the original ending is printed in Phoenix: The Untold Story #1