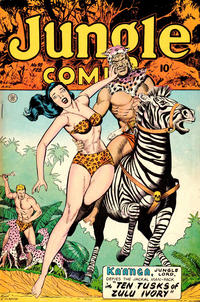 First Line of Dialogue or Text
Beware! Beware! For this is the swamp of the dengua plague --
Genre
jungle
Characters
Kaänga; Ann Mason; Koko; Markham; Lindstrom; Michael; Marmo; N'geeso
Synopsis
Station manager Markham spreads word that the station personnel are suffering from fever and the natives give it a wide berth, enabling Markham to steal ten tusks of ivory. When Lindstrom, the station owner arrives, Markham convinces him to sign over the local mines to him. Kaänga rescues the party that Markham had taken hostage and Markham is killed by a captive gorilla.
Reprints
Keywords
dengua plague; fishing; gorillas; ivory; mines; rhinoceroses; saddle zebras; Snake River

Markahm's plan changes halfway through the story from wanting to steal villagers ivory to tricking Lindstrom out of mining permits, without any explanation.

First Line of Dialogue or Text
The warm, jungle-scented breeze sweeping across the veldt suddenly changes direction.
Genre
animal; jungle
Characters
Simba; Tarku (elephant); Dr. Groton
Synopsis
Simba is wounded by a rhinoceros that proclaims himself king of the jungle. Simba's wounds are treated by a doctor on safari. When the rhinoceros attacks Simba's family, Simba stands his ground and defeats him.
Keywords
rhinoceroses

First Line of Dialogue or Text
'The festering sore of jealousy poisons the belly and rots the heart'...
Genre
jungle
Characters
Wambi; Maru; Tawn; Ogg; Sirdah
Synopsis
After Wambi rescues an orphaned lion from a hunter's trap, the boy becomes jealous of the attention given to the cub by his jungle friends. He plays a series of practical jokes on them that almost results in his own death when he falls into the hunter's tiger trap and they don't believe his cries for help. At the instance of the monkeys who have see Wambi's fall, they go to his aid.
Keywords
jealousy; practical jokes; rafts; tiger traps; trip wire snares; waterfalls

Lions at Large (Table of Contents: 6)

First Line of Dialogue or Text
The tiger hunt! One of the jungle's most exciting adventures...
Genre
non-fiction; jungle
Synopsis
A description of a tiger hunt.
Keywords
animal hides; elephants; tigers

The rest of the page is taken up by the Ownership Statement.

[Statement of Ownership] (Table of Contents: 8)

Genre
jungle
Characters
Zazenda; M'gombo; Tabu
Synopsis
Tabu and the district commissioner travel by astral projection to the land of the witch Zazenda where Tabu bests her in a magic duel.
Keywords
astral projection; leopards

This story is referenced in "Seduction of the Innocent". It claims there is a hidden drawing of a nude female on Tabu's shoulder (see Page 5, Panel 7).