Monsters of Mura! (Table of Contents) 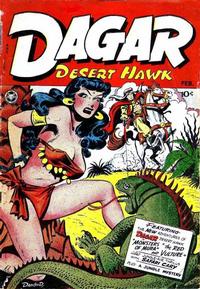 Monsters of Mura! (Table of Contents: 1)

Genre
adventure
Characters
Dagar [Bart Benson]; Ayesha; Chuck; Wendi; Mura (villain, ruler of the lizard people, death); the Monsters of Mura (villains, giant desert lizards, some die)
Synopsis
After being saved by Dagar from Ragut the Bandit, Chuck, Wendi and Ayesha are caught up in a sandstorm and transported to the Lost City of the Lizard People. Their ruler, Mura, makes them into slaves, along with others who have stumbled into the city, so that its location can be kept secret.
Reprints
Keywords
Lost City of the Lizard People

Retitled in Pioneer reprint as "Murderous Monsters of Mura!"

Claws of the Red Vulture (Table of Contents: 2)

Previous indexers credited the art to Jack Kamen or to Edmond Good. Darci reports, via the GCD Error Tracker (http://errors.comics.org/show_bug.cgi?id=10195), 2015-06-02, that Jim Vadaboncoeur Jr strongly disagrees with those suggestions. Tony Rose agrees that it is not the work of Jack Kamen.

Spawn of Doom (Table of Contents: 5)

Splash page also used as the cover of the Humdinger reprint.

Signed on splash page at lower left (on palm leaf).