No copyright registration or renewal appears to be on record for the issue. As such, the exact publication date is unknown. However, it most likely went on sale in December 1939. Whiz Comics was a monthly series, and the publication date reported to the U. S. Copyright Office for #3 is January 12, 1940.

According to the indicia, Fawcett's corporate address was 1100 West Broadway Louisville, KY. Its general offices were in the Fawcett Building in Greenwich, CT. The address of the editorial offices was 1501 Broadway, New York City. 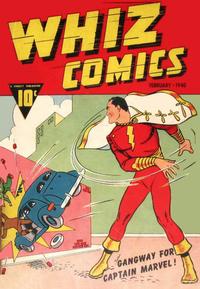 This is the 3rd reprinting of this story (with five added pages), first being in ashcan Flash Comics #1, then ashcan Thrill Comics #1. In all respects, the characters are not introduced in this story, except possibly for Captain Marvel (known as Captain Thunder in the ashcans). So the term "introduction" has been removed from all characters except our hero.

Genre
superhero
Characters
Ibis the Invincible [Prince Amentep] (introduction); Princess Taia (introduction)
Synopsis
From the Egyptian wing of a famous American museum, young Prince Amentep rises from the dead as prophesied, and, with the help of the Ibistick, begins helping people in need. He then boards a ship, embarking on a search for the Princess Taia.
Reprints
Keywords
Ibistick

[The Coming of Spy Smasher] (Table of Contents: 4)

[The Radium Theft of Dr. Death] (Table of Contents: 5)

[Incident At Maloana] (Table of Contents: 6)

Continued in the next issue.

Seals of Doom (Table of Contents: 7)

Continued in the next issue. Preliminary stoiry title given in last panel is "$500,000 or Else".

Characters
Captain Marvel [Billy Batson]; Ibis [Prince Amentep]; Lance O'Casey; Dan Dare; Golden Arrow [Roger Parsons]; Scoop Smith; Spy Smasher [Alan Armstrong]
Synopsis
Illustrated contest page in which readers are asked to name their favorite Whiz Comics character in a 50 word or less letter. There are $25 in cash prizes awarded: $10 for 1st place, $5 for 2nd place and $1 each for the next 10 places. Deadline for entry is given as January 15, 1940.