On-sale date is publication date in Catalog of Copyright Entries, 1948 Periodicals, page 16.
N. L. Pines is listed as editor in the Statement of the Ownership; no editor is listed in the indicia. 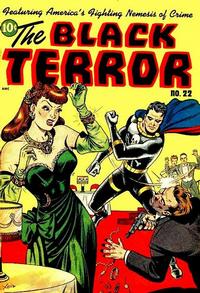 The Dream Maker (Table of Contents: 1)

Job Number
CC-1014
Genre
superhero
Characters
The Black Terror [Bob Benton]; Tim [Tim Roland]; Mr. Felton (chair of the Fibber's Club); Dr. Fission (nuclear physics authority); Bo Briantus (scientist, becomes the Black Terror's Deputy in the year 9767); Krol Mul (villain, ruler of the year 9767)
Synopsis
Bob relates a story to the Fibber's Club involving the Terror Twins, who are taken by a noted nuclear physics scientist thousands of years into the future with his time machine. Bob wins a trophy that he can keep for 50 years for telling the best fib, and he has a surprise for them to mull over: a talking mechanical Black Terror doll from the future that can answer their questions!
Reprints
Keywords
Dream Palace; Fibber's Club; time travel

The Terror Twins are both shown wearing domino masks.

One wonders if this story's Fibber's Club was in any way influenced by the Liar's Club, as chronicled in many issues of DC's golden age adventures of The Flash?

Violins For Villainy! (Table of Contents: 3)

Job Number
CC-1035
Genre
superhero
Characters
The Black Terror [Bob Benton]; Tim [Tim Roland]; James Spragg (wealthy patron of the arts); Jarvis (Spragg's butler); Harold Cosgrove (young violinist); Halloran (villain); Halloran's gang [Red; others un-named] (villains)
Synopsis
A wealthy patron of the arts decides to find a deserving youngster who will appreciate his Stradivarius violin by holding a music contest in Vocalian Hall. Unfortunately, a group of crooks decide that the violin could line their pockets with much needed cash, so they kidnap, then disguise, a young violinst, to win it for them, and it's up to the Terror Twins to stop them.
Reprints
Keywords
Stradivarius; Vocalian Hall

For art spotters: other possible artists on this story include: Mike Suchorsky, Bob Oksner, Sheldon Moldoff, Ed Moritz, Ed Hamilton (inks only), and an artist who once signed as C.L..

From the Black Terror Scrapbook (Table of Contents: 4)

On the Record! (Table of Contents: 6)

The Terror Twins are wearing domino masks in this story in many panels.

A Gun for the Professor! (Table of Contents: 7)

Mark of the Fur Thief (Table of Contents: 8)

The story of two brothers: one, who was quite wealthy, but miserly, and another, not well-off, but one who was generous to a fault.