She Came from the Future to Save the Past... ...Only to See It Die! (Table of Contents) 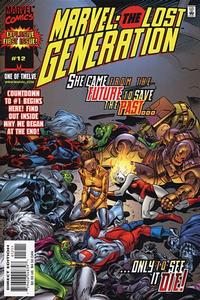 This Is Where It Ends! (Table of Contents: 1)

According to Official Handbook of the Marvel Universe: Teams 2005 (Marvel, 2005 series) #1, Makkari was present during the battle. He may be the speedster seen on page 16 panel 1.

The Knight Templar is only called by his full superhero name in the letters page of issue #8. All mentions of his name within the stories themselves refer to him simply as "Templar".

It is unclear if Mako is a member of the First Line in this issue or merely under the supervision of the Knight Templar.

The character on page 3 with the triangular goggles appears to be Katyusha, who is formally introduced in issue #7.

Doctor Strange's appearance here is explained in the letters pages of this issue and issue #5: He spent years in Asia, learning his craft at the side of the Ancient One, before returning to America to become a practicing mystic master. In fact, in his very first appearance (Strange Tales #110), it was revealed that the name of Doctor Strange was already "spoken in whispers". According to Roger Stern, it's quite possible that the Doctor Strange stories up through Strange Tales #122 actually took place before Fantastic Four #1.

Thunderbolt Ross is shown on the Watcher's monitor wearing two stars on each of his shoulders, making him a Major General in the U.S. Air Force at the time of this story.

Welcome to a World You Never Knew Existed? (Table of Contents: 3)