Dwarflings from Oceania (Table of Contents)

Despite The Lost World being the only strip touted on the cover, this cover illustration better fits the Auro Lord of Jupiter episode in this issue. 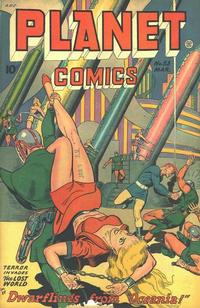 Dwarflings from Oceania (Table of Contents: 1)

Baker art is most likely freelance at this stage and not through the Iger Shop. The fact that Planet Comics has had VERY little Iger work reinforces that likelihood.

Goz Is Coming (Table of Contents: 3)

Holiday on Venus (Table of Contents: 4)

Reef Ryan is not in this story.

The bottom one third of the page is taken up by the Ownership Statement.

First Line of Dialogue or Text
Cymradia has fallen! The brain-men's castle gates gape...
Genre
science fiction
Characters
Futura [Marcia Reynolds]; Guest Stars: Aborotes (death); Jarl Sud (death); the Keeper (as a ghost); Mentor (villain, death); Cymradians (villains, all die)
Synopsis
Believing that Mentor and the Brainmen have all perished, Futura ends "Project Survival" and heads for home, not knowing that Mentor and the Cymradians survive and intend to strike back at her, once and for all time!
Reprints

The Fire Gem of Kal-Jmar (Table of Contents: 8)