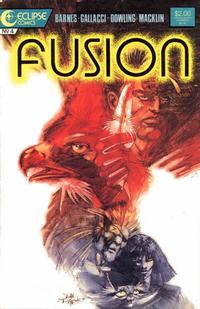 The Penumbra / promo (ad from the publisher) / 1 page (report information)

Art credits in the Fusion #17 letter column are for Gallacci and Dowling, but Macklin signed one of the panels in the story. R S, via the GCD Errors List, suggests Gallacci may have done the text caption lettering (based on comparisons of the "E"'s with Gallacci's hand-lettered editorial material in ALBEDO #5 (Thoughts & Images, 1983 series), but not the lettering within the art panels.