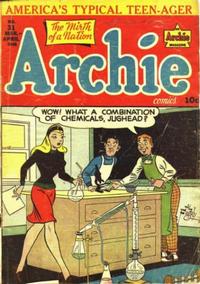 The Uninvited (Table of Contents: 1)

Match the soup to its country of origin, word search, and puzzle. Early indications of the house style.

Snow Use (Table of Contents: 3)

The Book Report (Table of Contents: 5)

Form 24 words from the letters in "Archie", help Veronica and Archie find a matching pair of shoes, word square. Early indications of the house style.

The Cat's Meow (Table of Contents: 9)

My Heart Belongs To Lizzie (Table of Contents: 11)

Characters
Archie Andrews; Fred Andrews; Mrs. Andrews; Jughead Jones; Max (introduction)
Synopsis
When Mr. Andrews needs a trade-in to get a new car, he has Jughead fix up Archie's jalopy and trades it in. But when Mr. Andrews sees how much Archie misses his jalopy, he buys it back part by part.
Reprints
Keywords
car sales; jalopy; mechanic; trade-in

Archie refers to his jalopy as "Lizzie" in this story.

I Can Get It For You Wholesale (Table of Contents: 12)

Characters
Betty Cooper; Veronica Lodge
Synopsis
Veronica convinces Betty to buy a dress wholesale, only for Betty to find it for a lower price in a Riverdale dress shop.
Reprints
Keywords
dresses; wholesale