Attack of the Missing Link! (Table of Contents)

Cover letters credits confirmed from the files of Danny Crespi, via Todd Klein as posted on the Comics History Exchange page on Facebook (4 September 2016). Original letters credit was tentatively suggested as belonging to Annette Kawecki. 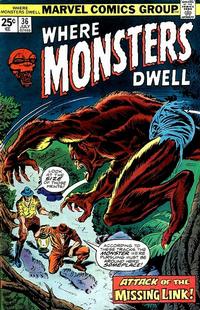 The Missing Link! (Table of Contents: 1)

Genre
science fiction
Synopsis
Scientists find a seemingly primitive man, but they discover that he is really from a future where nuclear war has destroyed civilization.
Reprints

What Lurks Beneath? (Table of Contents: 2)

Job Number
[H-458]
Genre
horror-suspense
Synopsis
A diver tries to capture mermaids to sell them to zoos, but they capture him instead and place him in an exhibit.
Reprints

The Terrible Fate of Mr. Wren! (Table of Contents: 3)

Genre
horror-suspense
Synopsis
A scientist puts off marrying until he is wealthy because he wants to avoid the mistake of his parents always arguing since they were poor. He becomes wealthy by inventing a matter duplicator device. When the girl he wishes to marry steps in front of the device, there are now two of them, arguing over which one of them gets to marry him.
Reprints

The Impossible Tunnel! (Table of Contents: 4)

Job Number
[V-629]
Genre
horror-suspense
Characters
Robert Saunders; Omor
Synopsis
Robert Saunders wants to build a sub-oceanic tunnel from North America to Europe. He discovers a gentle underground civilization and he destroys the tunnel to protect them from the upper world.
Reprints

Bill Everett inker credit changed based on information from the Atlas/Timely discussion list. Script by Bob Bailey, 2005-08-12 (Per Sandell ed.)