Superman for a Day (Table of Contents) 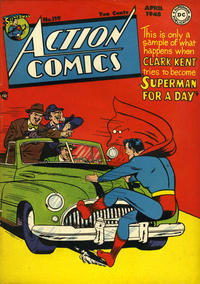 Superman for a Day! (Table of Contents: 3)

This is the first issue with no by-line credit to Siegel and Shuster. One of the rare issues in which Clark Kent actually changes to Superman in a phone booth.

Death on the Speedway (Table of Contents: 5) (Expand) /

The script for this story is credited as possibly "Writer S" by Martin O'Hearn.

Concert for Crime! (Table of Contents: 9)

Genre
adventure; superhero
Characters
Zatara; P. Piper; the Mayor of Oak City (villain)
Synopsis
P. Piper, who relaxes by playing his flute, cleaned out a bunch of crooks in Hicksville and has come to Oak City to repeat the process. This he achieves by luring crooks to steal his flaunted money, then gassing them. When he tries to collect the rewards he is cheated by the town politicians. He has a chance encounter with Zatara, who causes the flute to magically transform crooks into human sized rats. The incoming mayor then gives Piper his just reward.

Mystery on the Mountain (Table of Contents: 11) (Expand) /

First Line of Dialogue or Text
Here I am back, Moiph...
Genre
humor
Characters
Cabbie Casey; Moiph
Synopsis
Moiph sells Casey a cab with no rivets, each part being welded together to another. While driving his first fare of the day the car literally falls to pieces.

Cooking with Gas (Table of Contents: 13)

Sequence added by Saltarella via the GCD Error Tracker.

The Birthday That Backfired! (Table of Contents: 15)

The cruder inking style confirms the hand of Roussos.

First Line of Dialogue or Text
Say, Dad let me do it!
Genre
humor