The Terror of the Talismans (Table of Contents) 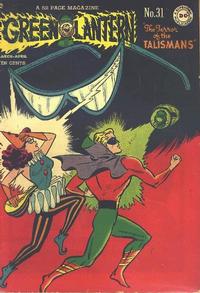 The Terror of the Talismans, Part One (Table of Contents: 2)

Job Number
GL32B
Genre
superhero
Characters
Green Lantern [Alan Scott]; Doiby Dickles; Harlequin [Molly Mayne] (villain, chronological 9th appearance)
Synopsis
A mysterious crime boss devises an ingenious scheme to get Green Lantern and the Harlequin to give up their weapons (his power ring and her spectacles)...then, his gang uses them to commit crimes!

The job number indicates that this story was originally to appear in Green Lantern #32. Alan Scott works for Station WXZ and his secretary is Molly Mayne. Oddity: back in issue #3, a Nazi sailor dons the power ring and is automatically destroyed, yet in this story, a crook uses it to commit crimes with no ill effects!

The Terror of the Talismans, Part Two (Table of Contents: 5)

The Dummy in the Wax Museum (Table of Contents: 6) (Expand) /

The Magic Crime (Table of Contents: 9)

First Line of Dialogue or Text
I distinctly heard you say, 'Run down'!
Genre
humor

Beauty and the Fool! (Table of Contents: 15)