This issue does not have an indicia anywhere in the comic, as far as can be determined from microfiche and from the reprinted inside front cover in the Masterwork, which does not leave enough room beneath the contest text for an indicia. The Indicia publisher, frequency and volume are inferred to be the same as issues #1 and 3.

[none] (Table of Contents) 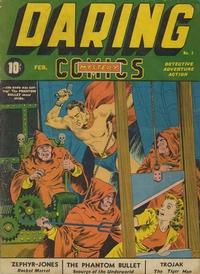 [Voyage to Sunev] (Table of Contents: 2)

Genre
science fiction
Characters
Zephyr Jones (introduction); Corky Grogan (introduction); King Bolo; Princess Tonka; Birdmen of Sunev; Gen. Roudo (villain); The Parrot-Men (villain)
Synopsis
Scientist and inventor, Dr. Morrison Jones, died before his rocketship that would realize his dream of making the first trip to the planet Mars could be completed. His son Zephyr, however, vows to live out his father's dream.
Reprints

Next appears in Mystic Comics (Marvel, 1940 series) #1. Jerry Bails's Who's Who and the Lambiek Comiclopedia both list Fred Schwab as the artist although "Fred Schwartz" is not listed among his pen names, nor as a separate person. This seems likely to be a confusion of similar names. The Masterworks credits Schwartz as a person and not a pen name.

Cal Cagno was eventually on staff at Timely, and may have already been on staff at this point, making this possibly an in-house / freelance job. Not enough is known about Schwartz to help place the source.

[Origin of the Phantom Bullet] (Table of Contents: 3)

Genre
superhero
Characters
The Phantom Bullet [Allen Lewis]; Benny the Beggar; Alvarez Monez (villain); Bird-Men (villains)
Synopsis
Reporter Allen Lewis is baffled by the death of a wealthy man who clutches a feather in his hand, but soon learns of a mysterious race of "bird-men" that seemed to be involved. Given the secret for a gun that shoots ice pellets by a soon-to-be murdered scientist, Lewis adopts a costumed identity to track down the bird-men at any cost.
Reprints

King of the Jungle (Table of Contents: 4)

Genre
jungle
Characters
Trojak (origin); Trojak's father; Edith Alton; Balu (the tiger)
Synopsis
Trojak, raised in the jungle by a native tribe after his father was killed by hostiles, is encouraged to find his own people and leave the jungle. However, he discovers that the ways of his people are not to his liking, and returns to the jungle to fight off hostile savages attempting to kill a girl who has be-friended him.
Reprints

Dr. Michael Vassallo disputes the Larry Antonette art credits and suggests that Joe Simon may be the penciller and inker (), 24 November 2007 --- CONFIRMED in Alter Ego #76, page 9. Harry Mendryk confirms Simon as writer on atlastales.com based on conversations with Simon.

Genre
western-frontier
Characters
Ozias Wilkins; Mattie Wilkins
Synopsis
Mattie insists that the silver mine Ozias is working is worthless, and insists she will leave him if he continues to work it.
Reprints

The Masterworks tentatively credits Jack Alderman with the artwork, but Jim Vadeboncoeur, Jr. via the Timely-Altas list in January 2012 states that he sees no Alderman here. The heads and airplanes are likely drawn by a different artist than the rest of the strip. Jim believes that the same artist likely drew the majority of this strip and the strip in issue #4, or possibly a different artist drew #4 using this story as a close guide. Henry Andrews notes that the airplanes in this issue's story are much more detailed than in #4, indicating that the touch-up artist here did not work on the story in #4.

The story in #4 is from the Chesler shop, so this may be as well, but the unusual panel arrangement here (with wide spaces between the panels) which may or may not be a clue to the strip's origins, has not been spotted elsewhere.

Genre
adventure
Characters
Mr. E [Victor Jay]; Betty; The Vampire (villain)
Synopsis
Mr. "E", enemy of the underworld, sees connections in the recent deaths of several "captains of industry," knowing all four were silent partners in the Snead Oil Company but unaware at the same time that his old enemy, the Vampire, is behind it all.
Reprints

Only golden age appearance. Next appearance in The Twelve (Marvel, 2008 series) #1

Al Carreno was associated with Chesler at this time according to Who's Who, but also with Funnies, Inc. at an unspecified date. Cal Cagno may have been a Goodman/Timely writer. The studio source, if any, for this story is unclear.

Becomes the Purple Mask in the next two issues.
Likely Chesler shop material.