No indicia in this issue, nor in the other issue Timely published this month (Daring Mystery Comics #2). 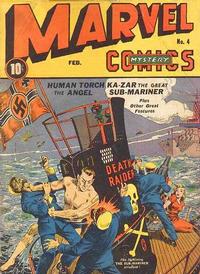 Genre
superhero
Characters
The Human Torch [Jim Hammond]; Inspector Reiss; Clancy (Policeman); Johnson; Maizie (introduction, underecover Policewoman); Dr. Manyac (villain, introduction); the Green Flames (villains, introduction for all, some deaths)
Synopsis
Torch has to deal with the threat of Dr. Manyac, who plans to use the Green Flames as a tool to exact revenge if his demands are not met.
Reprints

[Butch the Giant] (Table of Contents: 3)

[The Sub-Mariner Goes to War] (Table of Contents: 4)

Genre
superhero
Characters
The Sub-Mariner [Prince Namor]; Betty Dean; Tha-Korr; Council of Three (introduction, Atlantean rulers); the Nazis (villains)
Synopsis
Betty, concerned with what effect the Nazi submarine warfare has had on ocean-going travel and commerce, enlists the aid of the Sub-Mariner and his aerial subs to deal with the problem.
Reprints

[The Claim Jumpers] (Table of Contents: 5)

Genre
western-frontier
Characters
The Masked Raider [Jim Gardley]; Zeb; Luke; Manuel; Ben; Buck and his gang (villains, some die)
Synopsis
A couple of prospectors discover a large gold deposit on their property but are threatened by local crooks looking for the location of that claim.
Reprints

Genre
detective-mystery
Characters
Steve; Naylor; Jim Stinson; "Slip" Rodney (villain)
Synopsis
Steve picks up a hitchhiker along side a road, not knowing that he is a wanted killer.
Reprints

The statement of ownership is printed in the last column of the story. Artist's first name and note added by Craig Delich 2008-11-8.

All addresses for Martin and Abraham Goodman as well as for Timely Publications given as 330 W. 42nd St., N. Y. C.

[Quest for a Crime Boss] (Table of Contents: 9)

Fourth Episode [Return of the Oman] (Table of Contents: 10)

Bracketed story title found in the last panel of story in Marvel Mystery #3.