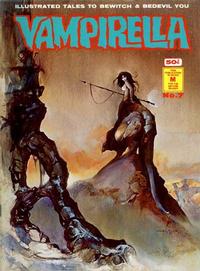 First Line of Dialogue or Text
And what a girl she is!
Genre
horror-suspense
Reprints

This page is an Australian composition. The Frazetta image on the left was used several times in Vampirella promotions, possibly first in "Vampirella Is Here" in Creepy (Warren, 1964 Series) #29 (September 1969). The image on the bottom right is composed of two originally separate images: on the left is a Frazetta drawing from the introduction to the "Witch Trilogy" in Vampirella (Warren, 1969 series) #7 (September 1970), which was also used in early back issue advertisements; on the right is Gonzalez's splash panel from "The Origin of Vampirella", in Vampirella Annual (Warren, 1972 series) #1 (1972). The origin of the text is unknown and might have been created by KG Murray. Parts of it are used on KG Murray's regular Vampirella advertisements in Creepy and Eerie.

The Resurrection of Papa Voudou (Table of Contents: 3)

The Octopus (Table of Contents: 6)

The Sentence (Table of Contents: 7)

The Matrimonial Murderer (Table of Contents: 10)