This issue is Red Shield Continuity #2, and went on sale on time. It also features Codename: Patriot promotion on the cover; a crossover with the other Superman titles this month. 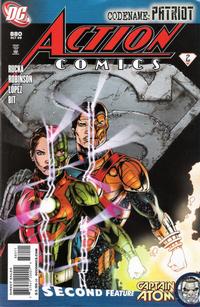 Genre
superhero
Characters
Nightwing [Chris Kent]; Flamebird [Thara Ak-Var]; Superman; Supergirl [Kara Zor-El]; Ral-Dar [Patriot]; General Sam Lane; Lieutenant Hollister; Mirabai; Mon-El; Morgan Edge; Lois Lane; The Guardian [Jim Harper clone]; Science Police; Atlas; Metallo; Reactron; Jimmy Olsen (cameo); Perry White (cameo); Amy Rael (cameo); Blanco (cameo)
Synopsis
Ral-Dar is fleeing to Earth, followed closely by Superman and Supergirl. General Lane sends planes to attack, and Ral-Dar destroys them, leaving the others (plus Mon-El) to save the pilots while he escapes. Mon-El takes Superman and Supergirl to Science Police headquarters to discuss the situation with the Guardian. Lois also bursts in on the meeting, and has a quick (private) reunion with Superman, informing him that Chris is back. Ral-Dar has escaped to the Project, where he is known as Patriot. Nightwing and Flamebird discuss the situation, and Flamebird reveals jealousy over an autograph-seeker leaving a note with her phone numbers tucked in Nightwing's armor. Nightwing responds by kissing her, and she returns the kiss, but they decide to resume their search for Nadira and Az-Rel. But those two find them, and the chase is on. They are led into the tunnels of Metropolis, where they are suddenly weakened. Mirabi appears, and unworks her illusion on Metallo and Reactron, who were disguised as Nadira and Az-Rel.

Story continued from Superman: World of New Krypton (DC, 2009 series) #6 and continues in Supergirl (2006 series) #44. There is Kryptonese dialog in this issue, but it is all translated into English.

Genre
superhero
Characters
Captain Atom [Nathaniel Adam]; Wodan; Lord Gadrey (unnamed); Royard (unnamed)
Synopsis
Captain Atom has collapsed, but recovers in time to stop a soldier from killing him. He then acts as if he has just awakened, and looks around, seeing the destruction he has caused. He then goes to the castle he was attacking, forces his way in, and talks with the king to see if he can figure out what's going on. At first he can't even remember his name, nor what he is doing there; but then remembers he is Captain Atom.
Reprints