This issue is Red Shield Continuity #7, and went on sale on time. "Printed by World Color Press, Inc, Montreal, QC, Canada. 9/9/09." It also features World Against S promotion on the cover.

The Hunt for Reactron Part 1 (Table of Contents)

The credits inside the issue incorrectly credit the cover to "CAFU with SANTIAGO ARCAS". The Captain Atom headshot is taken from the Captain Atom second feature from issue #879. 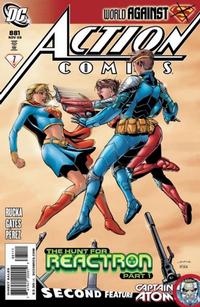 The Hunt for Reactron Part 1 (Table of Contents: 1)

Genre
superhero
Characters
Nightwing [Chris Kent]; Flamebird [Thara Ak-Var]; Supergirl [Kara Zor-El]; Mon-El (on video screen); Guardian [Jim Harper clone]; The Science Police; Reactron; Metallo; Morgan Edge (on video screen); Lois Lane; Perry White; Catherine Grant; Squad K (cameo)
Synopsis
Supergirl, Nightwing, and Flamebird are transported into an alley. Supergirl attacks the others, thinking they tried to kill her. They deny it, and Nightwing reveals to her that he is Chris. They are interrupted first by a crowd calling them killers, then by the Guardian and the Science Police, who accuses them of killing Mon-El. They barely manage to escape, fleeing to an apartment Supergirl has in Paris. While Flamebird listens in on various newscasts throughout the world, Supergirl and Nightwing discuss the situation, including that Flamebird seems to be crazy for believing she is connected to the real Flamebird. Flamebird also listens in on that conversation, and confronts Supergirl, who also is accusing her of letting her father die. That's too much for Flamebird, who punches Supergirl through the wall and into the Eiffel Tower. There, they are confronted by Squad K. Meanwhile, Lois is trying to track down her father, and is warned by Cat Grant that she is championing aliens who are killers and not on our side.
Keywords
Eiffel Tower

Story continued from previous issue, and continues in Supergirl (2006 series) #45. There is Kryptonese dialog in this issue, but it is all translated into English. The French text on page 20 is roughly translated as "The Kryptonians! They are here! They destroy the tower!"

Genre
superhero
Characters
Captain Atom [Nathaniel Adam]; Colonel Gunn; Specialist Jenny Blake [Natasha Irons]; Wodan; Lord Gadrey; Royard; Danel (unnamed); Aggaro (unnamed)
Synopsis
Captain Atom is being monitored by human military personnel. They realize he has his wits back. He is still trying to remember, when he is attacked the the military in battle suits. He urges his new friends to flee while confronting the military. They take him down, but in turn the battle suits are taken out by a magician. One of the attackers, Specialist Jenny Blake, is captured, and forced to help carry off Captain Atom.
Reprints