This issue is Red Shield Continuity #11, and went on sale on time. "Printed by World Color Press, Inc, Montreal, QC, Canada. 10/07/09." It also features "World Against S" promotion on the cover.

The Hunt for Reactron Part 3 (Table of Contents) 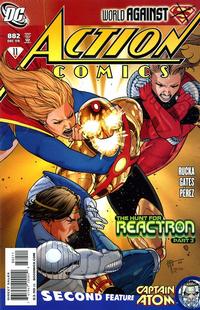 The Hunt for Reactron Part 3 (Table of Contents: 1)

Genre
superhero
Characters
Nightwing [Chris Kent]; Flamebird [Thara Ak-Var]; Supergirl [Kara Zor-El]; Squad K [Colonel Percy Hazard (death); others]; General Sam Lane; Reactron; Lieutenant Hollister; Lois Lane; Lana Lang
Synopsis
Colonel Hazard finds himself and Squad K reporting to General Lane, and is forced to take Reactron along on a mission to find Kryptonians in Metropolis. Lois meets up with Chris and Lana in an replica Blue Beetle Bug at a Metropolis museum, and they compare notes. Meanwhile, Supergirl and Thara are also discussing things, when the Squad K vehicle passes by. Chris decides to be a decoy to lure them away from all the others. Supergirl and Thara join, allowing Lois and Lana to clear away. The forces including Reactron attack, forcing the trio to hide underground, with Reactron clearly not obeying orders by putting civilians in harm's way. The forces catch up to the trio. They decide to go for a new tactic, and surrender. Restrained by red sun manacles, they try to convince Colonel Hazard that they've been framed, and by Reactron. They say if they really did do the killings, why did they surrender? Colonel Hazard looks like he's being convinced, so Reactron decides to give a message, and blasts Hazard and his men, killing them all. And the trio is next.
Keywords
Blue Beetle Battle Bug (replica); Metropolis Museum of Science and Industry

Genre
superhero
Characters
Captain Atom [Nathaniel Adam]; Danel; Aggaro; Specialist Jenny Blake [Natasha Irons]; Superman (flashback); Royard; Major Force (cameo)
Synopsis
Captain Atom awakes in an encampment, and discovers that Specialist Jenny Blake is really on the other side, has has been working with the rebels, revealing herself to be Natasha Irons. She informs Captain Atom that he had been brainwashed by General Lane and Mirabai and turned into a weapon. He starts remembering bad things he had done, including as Monarch. Royard catches up with them, and wants to capture Captain Atom, but behind him stands Major Force.
Reprints