[Marvel Comics Re-Presents The First Ever] (Table of Contents) 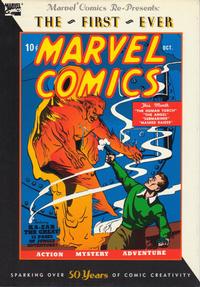 Includes a small reproduction from the cover of Marvel Comics #1.

[Credits and Indicia] (Table of Contents: 4)

All Gustavson credits confirmed and courtesy of Terry Gustafson, son of Paul Gustavson.

The Torch That Lit The Way (Table of Contents: 8)

Carl Burgos's Hot Idea [The Story of the Human Torch!] (Table of Contents: 9)

[Origin of the Human Torch] (Table of Contents: 10)

First Human Torch story. The Human Torch wears a blue uniform in this story. He doesn't adopt the Jim Hammond identity until issue #4.

Bill Everett's Hurricane [The Story of the Sub-Mariner!] (Table of Contents: 13)

[Origin of the Masked Raider] (Table of Contents: 15)

Genre
western-frontier
Characters
The Masked Raider [Jim Gardley] (introduction and origin); Lightning (Raider's horse); Steve (Sheriff); Lordin (rancher); Mr. Bleck (rancher, death); Mrs. Bleck (death); Cal Brunder (villain, introduction); Slick (villain); Rowdy (villain)
Synopsis
Cal Brunder, who has been forcing small ranchers in Cactusville to sell out to him at his price, sends his men to the ranch of Jim Gardley. When Gardley he won't sell, he has a phony charge of rustling leveled against him.
Reprints

Art identification by Dr. Michael J. Vassallo of the Timely-Atlas list. Note that the 3rd letter in the signature's first name is a dense smudge. The Masterwork edition and Craig Delich interprets it as an "h" (Tohm), while Dr. Vassallo believes it is an "m" (Tomm).