Per indicia: Copyright [2009] Boom! Studios. Printed in Canada. // This issue shipped with different four covers and a special promotional price of 99 cents. 50% of retailers' orders were filled with Cover A, 25% with Cover B, and 25% with Cover C, while one copy of Cover D was sent to retailers as an incentive for every ten standard copies ordered.
This issue has variants:

[Cover A] (Table of Contents) 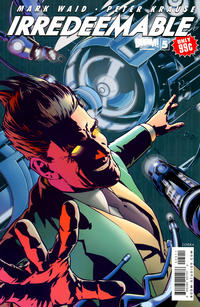 The inside front cover has head shots of cast from previous issues and recap of story so far, plus logo, credits, and indicia set against negative red-&-black detail of #1's Cover A.

Genre
superhero
Characters
The Plutonian; The Paradigm [Volt; Bette Noir; Gilgamos; Kaidan; Charybdis; Qubit]; Modeus robots
Synopsis
The Plutonian addresses everyone on Earth using a device in his trophy room "seized from Modeus". Volt recalls his invitation to join The Paradigm and how, more recently, he lost his left arm. Charybdis makes a revelation about his powers, an accusation about Bette Noir, and an observation about Qubit's Modeus robots in the wake of their surprising find.
Reprints

The Anchor / promo (ad from the publisher) / 5 pages (report information)