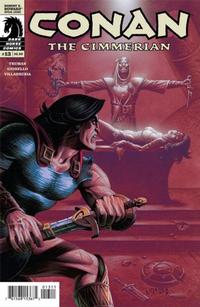 This page contains the indicia and credits for this issue with an accompanying illustration and quotation.

Letters from Captain Nathaniel Jaime, Mark Munroe, and T. William Gans with an accompanying preview of the next issue's cover and a preview of the cover of the Solomon Kane: The Castle of the Devil trade paperback.

First Line of Dialogue or Text
I was born in the little ex-cow-town of Peaster, about 45 miles west of Fort Worth...
Genre
biography
Synopsis
Howard describes his birthplace.