[The Doll Man Joins the Suicide Club] (Table of Contents)

Per the consensus of the members of The Reed Crandall Appreciation Page on Facebook on 4 August 2021, this work is not by Reed Crandall. The original indexer suggested that maybe the pencil work was done by Crandall.

The members of The Reed Crandall Appreciation Page suggested maybe this was done by Al Bryant. However, Per Bails' Who's Who, Bryant left comics by 1948 due to a self-inflicted car crash and subsequent eight-year hospitalization, placing any 1948 credits for Bryant in doubt. So currently, no creator can be confirmed for this cover. 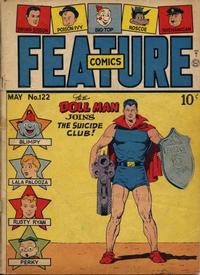 Genre
superhero
Characters
Doll Man [Darrel Dane]; Harry Payne (introduction); The Suicide Club (villains, introduction for all)
Synopsis
Doll Man comes up against a weird and macabre group called the Suicide Club, consisting of a group of men who are tired of life, but don't have the courage to end it all. So members of the group "assist" others in the group to accomplish their difficult passage out of this world!
Reprints

[The Floating Diamond of Demeres: Part 3] (Table of Contents: 6)

First Line of Dialogue or Text
Doggone! I get more absent minded every day!
Genre
humor