Per indicia: Copyright [2009] Boom! Studios. Printed in Canada.
This issue has variants:

Cover A shipped in 50/50 split with Cover B. Its art was also used for the 2nd printing. 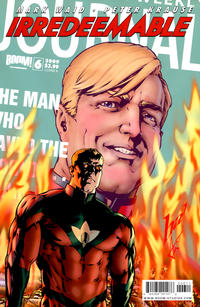 The inside front cover has head shots of cast from previous issues and recap of story so far, plus logo, credits, and indicia set against negative red-&-black detail of #1's Cover A.

Genre
superhero
Characters
The Plutonian; Danny Anderson; The Paradigm [Gilgamos; Bette Noir; Kaidan; Volt; Charybdis; Qubit; Scylla (flashback only); The Hornet (flashback only)]; Modeus robots
Synopsis
The Plutonian is alerted to the location of Qubit's hideaway, so The Paradigm quickly travels to the one place they know he won't be: his own newly discovered citadel. What they see there may shed disturbing new light on a terrible plague.
Reprints

Story is untitled beyond series title. First caption: "Report of the Social Worker (as required by county code) ...".

The End of the World Is Extremely Nigh! (Table of Contents: 8) (Expand) /