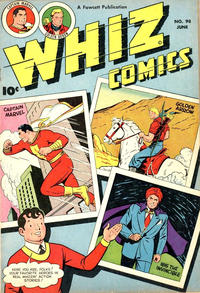 The Time Kidnappers! (Table of Contents: 2)

Genre
superhero
Characters
Captain Marvel [Billy Batson]; Shazam; Solomon; Hercules; Atlas; Zeus; Achilles; Mercury; The Prophet; Professor Bander; Dr. Louis Zweistein
Synopsis
In 1898 the Prophet gets visions of the future, he and his henchmen decide to travel to the future and steal future inventions to get rich.

How to Bedeck a Barren Bean (Table of Contents: 4)

At the Police Academy (Table of Contents: 6) (Expand) /

The Warring Tribe (Table of Contents: 7)

Genre
western-frontier; superhero
Characters
Golden Arrow; White Wind
Synopsis
As Golden Arrow rides along, he sees smoke signals, indicating a call to war by the Blue Hill tribe. They capture him and only by his quick wits does he escape to warn sleeping settlers and prevent a massacre.
Reprints

Watch the Birdie (Table of Contents: 9)

Genre
humor
Characters
Wilbur
Synopsis
A bird tells a customer that the soup is no good.

The Glacier Man (Table of Contents: 14)

Genre
superhero
Characters
Ibis; Taia; The Glacier Man (villain, introduction, death)
Synopsis
Prince Ibis and Taia investigate the mysterious deaths of sailors at the hands of a lone icy survivor of an ancient invasion force of glacier men who killed without mercy.
Reprints

The Secret That Saved the Sandlot (Table of Contents: 15) (Expand) /