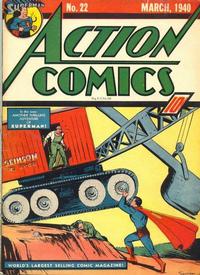 Genre
superhero
Characters
Superman [Clark Kent]; Lois Lane; George Taylor (unnamed in story); T-21 [Lita Laverne] (villain, foreign actress, introduction)
Synopsis
When Toran suddenly invades Galonia, Clark and Lois are sent to cover the war. On the ship to Europe, Clark saves the life of Lita Laverne, a famous foreign actress. When she later snubs him, Clark and Lois attend a reception for Lita to investigate. The reception is cut short when the city is bombed. Superman ends the bombing but discovers a neutral steamship is under attack and that Lita might have a connection.
Reprints
Keywords
Daily Star; Galonia-Toran War

The last panel is an illustrated promotional ad for The Spectre, with illustration by Bernard Baily.

Genre
adventure
Characters
Pep Morgan; Joe Mack; Charlie; Mrs. Mack; Rufus Toone (villain); Ezra Wright (villain); Fred Davis; Jack Green; Ted
Synopsis
As Pep is playing pinochle with the volunteer fire department, they receive word that Joe Mack's place is burning. When they arrive, they find that Joe's wife ran back in for her pocketbook. Pep prepares a daring rescue. Later, evidence is found that the fire might have been set intentionally, and suspicion falls on Rufus Toone and his nephew, Ezra Wright.

[Murder at the Slash-D Ranch] (Table of Contents: 6)

Genre
western-frontier
Characters
Chuck Dawson; Blacky; Andy Parsons; Mrs. Parsons; Jackson
Synopsis
A young "puncher" mistakes an old gunman for a friend, but his friendly slap causes him to be held at gunpoint. Chuck sees that the young man apologized, and he intervenes. Later, on a rough mountain trail, Chuck finds the young man's body and is coerced into helping track down the killer when the Slash-D ranch foreman finds him by the body.

[Beauty Was the Beast] (Table of Contents: 7)

Genre
adventure
Characters
Clip Carson; Gloria Anders; Harry Anders; Reginald Hood; Mr. Ballard
Synopsis
Aboard a liner en route from Algiers to South America, Clip sees a man, Harry Anders, knocked overboard and jumps in to rescue him. Back on board, the man and his daughter, Gloria, tell Clip about a statue that they obtained in Africa that has brought nothing but attempts on their lives, despite their readiness to return it. Clip goes to the room of an anthropologist, Reginald Hood, for more information but is met with great resistance. Shortly thereafter, Harry is found murdered, and Clip races to solve the case.

First Line of Dialogue or Text
No! Not a jitterbug...
Genre
non-fiction

Issue from Haiti (Table of Contents: 14)

Genre
adventure
Characters
Three Aces [Fog Fortune; Gunner Bill; Whistler Will] (brief origin); Matt Saunders; Sally Saunders; Perry Laverne; Martino Fenton; Nedra; Concho; Juan; Pepito
Synopsis
Concho and his raiders kidnap Sally and Perry, according to Nedra and Martino's plans. Martino soons finds that he has been double-crossed by Concho, who takes him captive as well. One night a whistling sound through the camp ignites the hopes of the captives.

Genre
humor
Characters
Rex; Rex's owner
Synopsis
Rex's owner kicks Rex out of a chair so that he can paint it. Rex finds a way to sleep in the chair again.

Genre
adventure
Characters
Zatara; The Mask (Villain); The Tigress (Villain); Ed Burton
Synopsis
Recently returned from England, Zatara dines at the El Storko Club, where he notices the Tigress. He sees her poison the drink of Ed Burton, a banker. Zatara saves him. The Tigress meets with the Mask and discusses their plans to kill Ed. Zatara hunts after the Tigress to stop them.