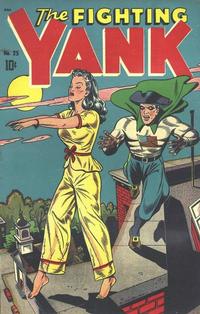 The Crossroads of Crime (Table of Contents: 1)

Genre
superhero
Characters
Fighting Yank [Bruce Carter III]; Larry Adams; Babs; Spike; Harmon; Bruce Carter [ghost?]; Mrs. Jones
Synopsis
While driving the getaway car after a bank robbery Larry Adams hits Babs. He stops to help her and falls in love with her while she is in the hospital. While he is trying to figure out how they can have a future together his gang captures the Fighting Yank and this forces Larry to make his decision.
Reprints

art credits from Len Wolinsky (January 2009 via the Error Tracker)

The Shadow of Dismal Island (Table of Contents: 2)

artist's name is a P or R in a box and is also signed on 2nd page of story but print is hard to make out.

The Kiss of Death (Table of Contents: 5)

Job Number
B-266
Genre
superhero
Characters
Fighting Yank [Bruce Carter III]; Joan Farwell; The Eel
Synopsis
A gambler murders his rich fiancée but is blackmailed by a criminal named The Eel. Fighting Yank must solve the crime and avenge the murder.

Previously tentatively credited to Graham Ingels by Craig Delich (September 2005). Current art identification by Saltarella who doesn't see any Ingels in this story.

Job Number
-29 H?
First Line of Dialogue or Text
I wish we could find some way to beat him up
Genre
humor

Art and writer identification by Saltarella.

The Case of the Antique Parchment (Table of Contents: 8)