Superboy inset taken from interior story. Cover bannered as part of the “Blackest Night” event. Cover is an homage to the cover of Crisis on Infinite Earths (DC, 1985 series) #7 ("after Perez"). 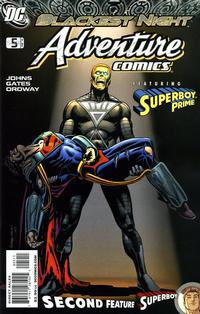 He Primed Me, Part Two: Flame War (Table of Contents: 1)

Seen in the DC offices are Dan Didio, Simona Martore, Mike Carlin, Eddie Berganza, Adam Schlagman, and many others. All of the Black Lanterns other than Alexander Luthor are unidentified, as are the victims Superboy-Prime remembers. There is no explanation for why Legion corpses should exist in the 21st century.

The Boy of Steel (Table of Contents: 2)