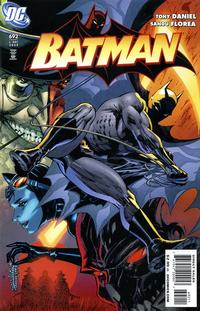 Life After Death Part 1: The Awakening (Table of Contents: 1)

The author discusses projects for Starman and Catwoman, using French and Italian. Appears on page 34 in this issue. Here are the official translations, from DC's The Source blog (http://dcu.blog.dccomics.com/2009/10/30/dc-nation-international-martores-m…):
TRANSLATION: Do you have a multilingual dictionary with you? Very good! Let's begin, then. I will start writing in French, which is the most beautiful language in the world. What I'd like to do is to tell you something about a night, the darkest of them all, when some black rings caused hell in the heroes' world. Once upon a time, there was a superhero named Starman. After his death, he came back several times under different names. I am very happy to announce that one of his incarnations is coming back, but this time, he will do something strange and terrifying! Our superhero will behave in a peculiar manner and will have an interesting encounter with an old, Irish friend and another character who’s very dark in his own way. This new Starman episode will be written by the magic hand of James Robinson.
TRANSLATION: And what about Italian? Do you speak it better than I do? Perhaps. However, as it's my mother tongue, I feel obliged to honor the country of spaghetti and Roman emperors and to annoy you even further by writing something in a language that probably sounds like Latin gibberish to many [of] you. Let's start then. Speaking of blackest nights again…I am always very excited at the idea of reading a story that has a solid and original plot, and I think that this time I am dealing with something like that. In fact, a new adventure featuring Catwoman, associated somehow to a "dark night" and written by Fabian Nicieza, is going to be presented to you very soon. This time, our favorite feline will have to face an old enemy who is known for his passion for artifacts generally used ornamentally.