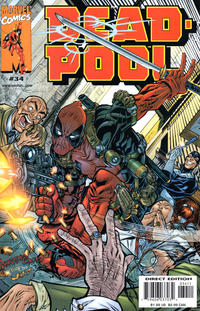 Chapter X Verse One: Send in the Clowns (Table of Contents: 1)

Genre
superhero
Characters
Deadpool; Kingpin [Wilson Fisk]; Bullseye; Death; Lab Assistant [Loki, unrevealed]; Power Man (cameo); Iron Fist (cameo); Ka-Zar (cameo); Zabu (cameo); Moon Knight (cameo); Steel (cameo); Black Panther (cameo); Hawkman (cameo); Solar, Man of the Atom (cameo)
Synopsis
Deadpool has a nightmare in which he is forced to move to a trailer park inhabited by cancelled comic characters (all written at one time by new series writer, Christopher Priest). He wakes up floating in a sealed healing chamber manned by a generic lab assistant, is told that his recent brush with death has caused his cells to degenerate and he is quickly turning into a puddle of goo. Deadpool tells lab guy of how he lost his job as the Kingpin's assassin to Bullseye. Deadpool is surprised to find Death herself floating in the healing chamber next to him.
Reprints