Both playing card covers have the same UPC
This issue has variants: 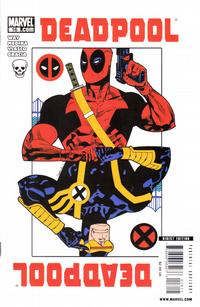 Want You to Want Me Part Two: No Man Is an Island (Table of Contents: 2)

Genre
superhero
Characters
Deadpool; Cyclops; Emma Frost [White Queen]; Wolverine; Domino; Mercury [Cessily Kincaid]; Dagger; Prodigy [David Alleyne]; Ellis Kincaid; Rogue (cameo); Colossus (cameo); Cannonball (cameo); Psylocke (cameo); Warpath (cameo); Karma (cameo); Dani Moonstar (cameo)
Synopsis
Deadpool makes a bid to join the X-Men on Utopia and Cyclops turns him down flat. Dagger takes up Deadpool's cause and, after Wolverine convinces him that the merc needs to be watched, Cyclops sends Domino to keep tabs on Deadpool. After a sound beating and a round of pancakes with Domino, Deadpool is given probationary status as an X-Man and dons his homemade costume. Much to Cyclops' chagrin, Deadpool decides to prove his worth to his new team by killing Mercury's father who is publicly demanding his daughter be released from Utopia.
Reprints