Giants of the Golden Atom (Table of Contents) 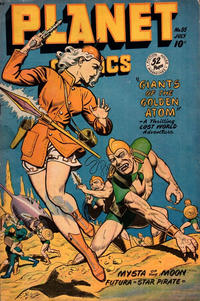 Winter in July (Table of Contents: 2)

First Line of Dialogue or Text
Rave, Thi, scream your harmless threats and curses...
Genre
science fiction
Characters
Futura [Marcia Reynolds]; Thi (villain, death); Yrina (intro, villain)
Synopsis
When the space-pirate Yrina is captured by the Space Patrol, she convinces them she is really Futura, and that Futura is Yrina.
Reprints

Murder on Mercury (Table of Contents: 5)

First Line of Dialogue or Text
Destination Jupiter! A simple ether hop for mighty...
Genre
science fiction
Characters
Auro Lord of Jupiter; Silva; Princess Varra (introduction); Karkor (villain, introduction)
Synopsis
While on a foreign planetoid, Auro purchases a new rocket ship for his trip to Jupiter, but it is in need of repair, so he seeks out repair parts. In the process, he saves a Princess from sure death from a gang seeking out a valuable jewel she has possession of.
Reprints

One quarter of last page is occupied by an ad.

There is evidence of Kiefer inks on pages two and three, at least, while panel six, page four, is pure Celardo.

Reef Ryan not in this story. One quarter of the last page is occupied by an ad.