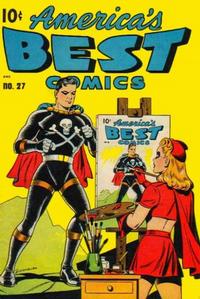 The Quiz Crime (Table of Contents: 1)

Job Number
CC-557
Characters
Miss Masque (Diana Adams);John Holder (introduction; death)
Synopsis
Diana Adams is invited to a party at the home of wealthy industrialist John Holder by Holder's nephews John and Rod. Holder confides to his lawyer that he has a scheme to determine who shall inherit his wealth, Rod or John. The scheme involves faking his death to find who grieves for him. When the scheme goes forward, Holder is truly dead, and Miss Masque must uncover the culprit.
Reprints

The Mystery of the Larsen Twins (Table of Contents: 3)

Job Number
CC-1110
First Line of Dialogue or Text
Young man, do you know what time it is?
Genre
humor
Characters
Zippie
Reprints

The Rainy Road (Table of Contents: 6)

The Hot Breath of Death (Table of Contents: 7)

Job Number
CC-873
First Line of Dialogue or Text
A practical joker pretended to be drowning...
Synopsis
a reinterpretation of the Boy Who Cried Wolf