This issue was originally scheduled to contain a Captain Marvel Junior story and house ads for it show him on the cover at the rear of the sleigh but when page counts dropped the story (and his cover image) was excised.

Christmas with the Super-Heroes (Table of Contents) 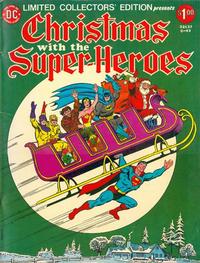 The Silent Night of the Batman (Table of Contents: 3)

Job Number
N-1428; N-1381
Genre
horror-suspense
Characters
Cain
Synopsis
On Christmas Eve, a man and his wife are awakened by the sounds of a prowler in the house.
Reprints

This story was originally 3 pages in House of Mystery #191. The added splash/introduction page is by Howard Chaykin, reprinted in altered form from Forbidden Tales of Dark Mansion (DC, 1972 series) #15 (March 1974) with image of Cain (in lower right) by Berni Wrightson pasted in from the Wrightson splash page in House of Mystery (DC, 1951 Series) #211 (February 1973). "House of Mystery" was added across the top of splash page.

Christmas Greetings from the Super-Heroes! (Table of Contents: 5)

[The Story of Fir Balsam] (Table of Contents: 6)

Santa Fronts for the Mob (Table of Contents: 8)

Sing Along with the Super-Heroes (Table of Contents: 9)

Includes the lyrics to Silent Night, Adeste Fidelis, Kings of Orient, Jingle Bells, Deck the Halls and Away in a Manger.

Season's Greetings from the DC Editors (Table of Contents: 11)