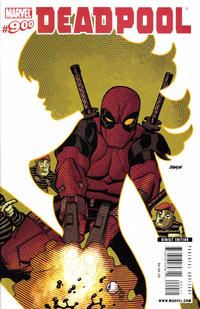 Close Encounters of the @*#$ed-Up Kind (Table of Contents: 2)

Silent but Deadly (Table of Contents: 3)

What Happens in Vegas... (Table of Contents: 6)

Genre
superhero
Characters
Deadpool
Synopsis
DP makes himself the victim of a crime for the Vegas CSI team to solve.

Story is a parody of the original tv show C.S.I. Crime Scene Investigation with a familiar cast of characters.

Great Balls of Thunder on the Deep Blue Sea (Table of Contents: 7)

One Down (Table of Contents: 8)

Genre
superhero
Characters
Deadpool; Beyonder; C.F.; Patch; Oyakata; Sazae; Widdle Wade (villain, death); Daruma (villain); Shigeru (villain, death); The Boss (villain)
Synopsis
In the distant past, Deadpool interferes with the Beyonder's plan. Shigeru creates a clone of DP, Widdle Wade. In the present, the Boss contacts Deadpool and tells him that a killer is on the loose and asks him to protect the next target, Oyakata, whom he knows. 'Pool travels to Japan where he encounters Widdle Wade and fights him off. In the past, Deadpool is also reunited with Oyakata's daughter, Sazae. Widdle Wade attacks again. 'Pool tells Sazae that he was the one who killed all of her father's old targets, thus restoring him to honor in his daughter's eyes.
Reprints

Presents very small cover images for 200 previous issues of Deadpool; Covers 201-900 are very tiny on one
page and utilize art from various Marvel comics with the Deadpool logo replacing the original title.

Presents 2/3 page cover art for next issue as well as art from two small interior story pages for that issue.