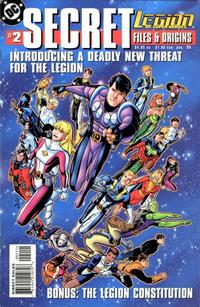 First appearance of the Blight in print.

The Legion Constitution (Table of Contents: 3)

The Table of Contents says this is adapted from Who's Who in the Legion of Super-Heroes (DC, 1988 series) #2-6, but the information there is extracted from four years earlier as shown here in the reprint notes (the edits are new here except for the missing 3.7). And much of the information was published in tidbits in even earlier stories, and in places such as Adventure Comics (DC, 1938 series) #325-326 and Legion of Super-Heroes #1 (February 1973).

The writer is listed in issues 308-310 as Paul Levitz, and the 2008 reprint also lists him, but it's likely someone else added the new clauses (this issue doesn't list a writer).

The table of contents calls this "Interview with United Planets President R.J. Brande", but it very obviously has a title on the sequence itself.

Elements of Disaster (Table of Contents: 9)

A Partial Listing of the United Planets and Affiliated Planets (Table of Contents: 13)

The Blight (Table of Contents: 14)